This report about the Rafah crossing between Egypt and the Gaza strip comes via Gaza TV News on Facebook. 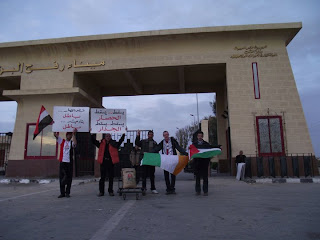 It is a step forward in breaking the Israeli siege of Gaza, which continues to cause widespread suffering.

Today the Tahrir4Gaza march entered Gaza, two days after their proposed entry date and brought with them the first bag of cement not approved by Israel and not through the tunnels, setting the stage for a massive shipment of cement & building materials.

This is a major step in taking down the policy of Mubarak that denied entry to much needed commodities to Gaza via the Rafah crossing. The march was undertaken with maximum co-operation with the people of Egypt and the post Mubarak authorities and expressed the will of the people of Egypt who wish to see and end to the siege.

The march was postponed after it's initial March 4th date due to complications with authorities that included the barring of foreign nationals to al-Arish and as a result the final delegation to enter Gaza was only 12 people in size.

There is still a lot of work to be done regarding the end of the siege, but with talk of another march and the possibly of a ship of cement following this up you can be assured that there will be a steady flow of people and goods ready to challenge it until it's end.'