The government has struck a deal with Facebook to invite ideas from the public on state spending cuts. The "spending challenge channel" will be used to take suggestions from the public for saving money prior to the Autumn spending review.

There are a number of things going on here. The first is the attempt to convince us 'we're all in it together'. This is one of the ideological myths that are being deployed to justify the cuts, and weaken resistance to them.

We're supposed to buy into the old notion of 'national unity', everyone united in a common endeavour to reduce the deficit we all apparently share responsibility for. This obscures both the causes of the crisis which is the backdrop to austerity measures - we certainly weren't all responsible for that - and the hugely uneven effects of the public sector cuts, pay freeze, VAT rise etc.

In fact we are seeing a systematic effort to make working class people pay for a crisis generated by the financial sector and wider failures of neoliberal capitalism. Rather than pursuing uncollected taxes from the rich, or curtailing the spiralling wealth of Britain's super-rich, the government is introducing regressive changes that fall most heavily on the poorest.

We can fully expect this to lead to a widening of inequality, in an already appallingly unequal society. This graph illustrates the impact of George Osborne's recent emergency budget, showing variations in how much the measures will cut household incomes for different sectors of society (with the poorest 10% on the left, the richest 10% on the right) 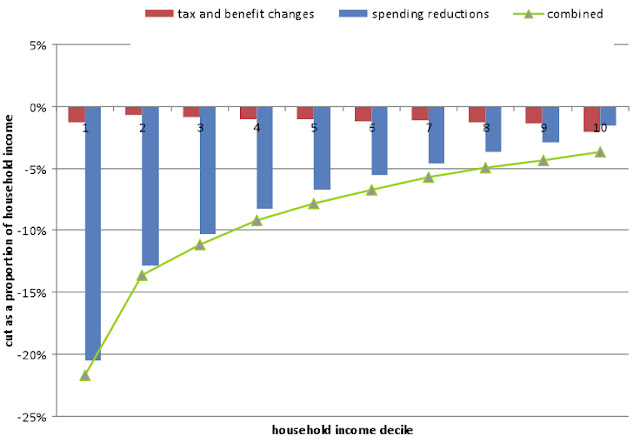 The Facebook 'consultation', like so many other PR moves by the government, is also designed to frame the issues in a way that excludes any suggestion of an alternative to deep cuts. The debate is not, in these terms, about whether or not there should be public sector cuts. It isn't even about how deep the cuts go, or their timing. It's merely about exactly where the knife is targeted.

This is vital in establishing an ideological orthodoxy. When even the IMF - known for being ruthlessly neoliberal - sharply questions the wisdom of cuts (on the grounds that austerity will reduce prospects for a recovery), this narrow framing requires a concerted effort. A key challenge for the left is to undermine this illusion of consensus and clearly outline the alternatives.

Furthermore, any emerging campaign or coalition of those opposed to the government will need to raise political slogans that challenge the current priorities and re-frame the debate. 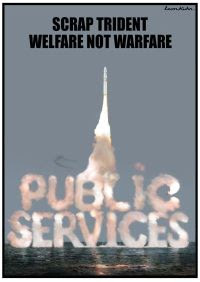 For example, Stop the War's call to cut war spending and scrap Trident directs attention to the possiblity of doing things differently. It also taps into the very different values many millions of people hold, and connects economic needs with broader political issues.

The phoney 'consultation' approach, finally, is designed to engender an illusion of democracy, inclusiveness and participation. The decisions are already taken, or will be taken behind closed doors by the political and financial elite, but we're supposed to be grateful for these exercises in political 'participation'.

Using Facebook adds an extra cool, modern veneer: this is popular democracy in the connected digital age. Except it is a purely cynical exercise which gives people no actual power, while propping up the dominant myth of an unarguable case for cuts.

It's time to raise our game in response. This means the left advocating political alternatives to the status quo and connecting these ideas with the widespread desire to stop the attacks on welfare and public services. I don't buy the idea, sometimes encountered on the left, that the cuts will 'hit' people later and there's not much we can do for now.

Millions of people know how serious the situation is. We need to start connecting and organising those who reject the ConDem coalition's policies. There is nothing inevitable about this happening - it requires initiative and a willingness to act.

Whatever action the trade unions take - and hopefully there will be mass public sector strikes - we can develop a broad political campaign now, to counter the dominant myths and lay the ground for serious mobilisations.

Join the Facebook group Vote on what cuts we want? No thanks, we don't want ANY cuts