The victory of Jair Bolsonaro as the new President of Brazil puts in the most far-right administration in the top 20 nations of the world.  Bolsonaro says he wants to crush ‘communism’, and restore ‘law and order’ by putting the military in control of the streets and stuffing the Supreme Court with his appointed judges.  He wants to loosen gun controls, crack down on gays and other ‘criminal’ elements, support President Trump’s policies and open up the economy and the Amazon forests to 'proper exploitation'.

How was it possible that Bolsonaro won this election?  Well, his support was to be found in the burgeoning religious evangelical movement in Brazil, among the rich and small business sectors who have been militantly opposed to the rule of the Workers Party since 2002 under Lula and then Dilma, who they saw as taxing and regulating business for the benefit of low income families, and destroying family values.  But the biggest reason was that most Brazilians are fed up with rising crime, high unemployment and corruption by all politicians.

Bolsonaro is seen as the man to end corruption (of course that will turn out to be the opposite).  To the middle classes, the Workers Party is seen as ‘stealing’ the country.  Lula is still in custody for corruption (probably on trumped up charges and mainly to ensure he could not run in the election).  But Bolsonaro won mainly because of the disillusionment of the working class with the Workers Party.  After the collapse of commodity prices in resources and agriculture, the economy went into recession. The blame for this and corruption has been laid at the door of the Workers Party.

But Bolsonaro did not get the majority of the 147m Brazilians entitled to vote.  Although it is compulsory to vote in Brazil, around 30% spoilt their ballots or entered blank papers.  Also the Workers Party is still the largest party in the lower house of the Brazilian Congress, which has 30 different parties represented.  So it won’t be easy for Bolsonaro to get his most authoritarian measures passed democratically.

Most important remains economic policy.  As I have explained in previous posts, the Brazilian economy is in trouble.  Economic growth is stagnating at best.

Unemployment is near post-global crash highs.

Because the rich do not pay taxes and inequality of income and wealth is one of the highest in the world, the government does not raise enough revenue to avoid huge annual deficits.

As a result, Brazil’s public sector runs the largest debt to GDP among all emerging economies.

The solution of the rich and the Bolsonaro administration will be ‘austerity’, namely yet further cuts in public spending (many Brazilian state governments are already bust and starved of funds), privatisations and deregulation of industry and the banks – but, above all, the destruction of Brazil’s state pension scheme.

Stock and bond markets have risen on hopes Mr Bolsonaro will deliver on this.  These ‘neo-liberal’ policies will be pursued by Bolsonaro’s likely finance chief Paulo Guedes.  This University of Chicago-trained economist is co-founder of BTG Pactual, once the country’s biggest home-grown independent investment bank. Markets expect Guedes to maintain a freeze on fiscal spending introduced by current President Michel Temer. They also see him introducing formal autonomy for the central bank and allowing state-owned oil company Petrobras to set fuel prices at 'market levels'.

On Sunday evening, following the victory of his putative future boss, Guedes said pension reform as well as slashing the "state’s privileges and waste" would be a priority for the new government.   So just as in the US, Brazilians will have ‘populist’ law and order talk from the President supposedly to stop crime, while introducing strident ‘neo-liberal’ reforms to help big business in Brazil and cut the share of income going to labour.

As I said in a post one year ago, the international agencies, foreign investors and Brazilian big business want an administration in power for four more years from 2018 to impose austerity, labour ‘flexibility’ and privatisations. That will drive up inequality further. Ironically, it won’t reduce the public sector debt because economic growth and tax revenues will be too low.  Indeed, the IMF forecasts debt will be much higher by 2020.

At the same time, more than half of Brazil’s population remain below a monthly income per head of R$560.  To cut this level of poverty to under 25% would require productivity four times as fast as the current rate. And there is no prospect of that under capitalism in Brazil.  That’s because the profitability of Brazilian capital is low and continues to stay low.

The profitability of Brazil’s dominant capitalist sector had been in secular decline, imposing continual downward pressure on investment and growth. 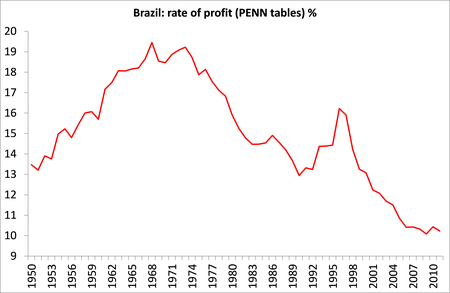 Brazil’s ruling elite face a difficult task in imposing control over its working class and cutting public spending and wages, and thus attracting significant foreign capital.  Brazilian capitalism will be stuck in a low growth, low profitability future with continuing political and economic paralysis.  And that is without a new global recession coming over the horizon.