Hundreds of trade unionists and their supporters gathered at Grey's Monument in Newcastle today to protest against the coalition government's proposed public spending cuts. 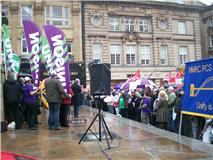 As Claire Williams, the Regional Convenor of Unison, told the rally: “the point of this protest is to send a very strong and clear message to the government that we won't accept public sector cuts on the scale that they are proposing...the slash and burn of public services doesn't help anyone”.

The demonstration, organised by the Northern Public Service Alliance, was part of the European Trade Union Confederation's (ETUC) day of action against the austerity measures being applied by governments around Europe.

Local contingents from Unison, GMB, Unite, PCS, UCU and many other trade unions rallied together to raise public awareness over 1 in 3 jobs in the North East region are in the public sector, and that any cuts to these public services will not only have a devastating effect on the communities they serve but also on the local economy.

Parts of the North East have amongst the highest poverty levels in the country. Cutbacks to its essential services will only serve to deepen inequalities and cause further suffering.

Many of the union representatives who spoke on the platform were also keen to bust the myth that “painless spending cuts could be achieved by privatisation”- noting that academies, free schools, internal markets and other attempts at privatising public services had only led to poorer, more bureaucratic services delivered at a greater cost to the taxpayer.

Rather, the only way to achieve economic and social recovery was through sustained investment in the public sector.

In the North East region similar rallies happened in Durham and Middlesbrough.

See related article impact of cuts in the North East.