The excellent Touchstone blog is one of the better things about the TUC. It provides a wealth of invaluable information about government cuts and their impact, meticulously tracking the cuts in its CutsWatch series - and skilfully demolishing claims that ConDem plans can be considered progressive.

The excellent Touchstone blog is one of the better things about the TUC. It provides a wealth of invaluable information about government cuts and their impact, meticulously tracking the cuts in its CutsWatch series - and skilfully demolishing claims that ConDem plans can be considered progressive. 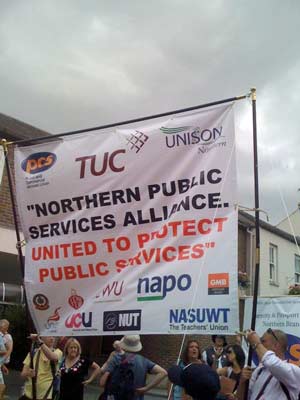 A new post published today is a gift to those of us campaigning in the North East, quite simply because it gives us the facts. Touchstone's Anjum Klair runs through a series of cuts in our region, with a particular focus on Sunderland, Newcastle and Middlesbrough. These cuts follow the announcements in the 22 June budget - it is set to get much worse with the comprehensive spending review on 20 October.

In Sunderland there is a 20% cut to Connexions (the careers and advice service for young people), a 27% cut to the Working Neighbourhoods Fund (thus damaging employment prospects in deprived communities) and an 11% cut in Prevention Grants, which fund things like programmes to reduce first-time offending, anti-bullying initiatives and teenage pregrancy reduction programmes.

In Newcastle there's a cut of nearly £2 million to the Education Area Based Grant. This 'includes a grouping of grants that gives extra resources to help children in the most deprived areas of the country'. In Middlesbrough there are substantial cuts to education, regeneration, environment and social care.

Touchstone notes that across the North East 'many schools and charities have had to drastically scale back their plans'. It relates a report from local paper the Journal that 'nine of the region's authorities were in the higher bracket for cuts, with just one in London'.

Via another local paper, the Evening Chronicle, it reports 'that children and the jobless in some of Tyneside’s most needy neighbourhoods are being targeted for cuts.' Middlesbrough's local press report councillors' concerns that the borough will ultimately face cuts of 20% in total.

The North East has already been badly hit by the cancellation of Building Schools for the Future: the region's 46 cancelled school building projects include 11 in North Tyneside and 14 in County Durham. Bridget Phillipson, a Labour MP in Sunderland, has highlighted the damage done to jobs in the construction industry.

There's also the devastating impact of national changes, such as cuts in welfare and social security. Unemployment in the region is 9.1% and set to grow under the impact of cuts. The regional economy depends upon public investment: 36% of the regional workforce is in the public sector.

The cuts are already starting to bite - and will, after 20 October, get a lot worse. A first step in building bigger and broader resistance is this Wednesday's protest rally - 12-2pm, Grey's Monument in Newcastle - called by Northern Region TUC and supported by Public Services Alliance, Coalition of Resistance and others.

Details of a major Coalition of Resistance public meeting, in early November, will be announced later this week. Our region is on the frontline for cuts - we should also ensure we are on the frontline of the fightback.