On 21 August 2008, our brother Sean Rigg, was arrested by police, “restrained” and transported to Brixton police station in the back of a van. He was removed from the van in a collapsed state and died a short while after whilst in the station yard. He never entered the custody suite door. 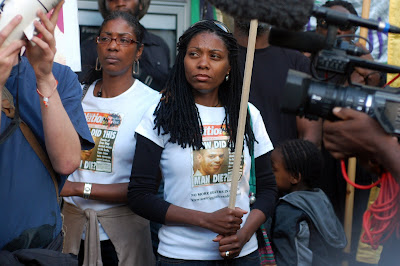 The events leading to his death raise suspicion and concern. Although a mental health service user, Sean was fit and healthy with no illicit drugs or alcohol found in his body at the time of his death. The Independent Police Complaints Commission's (IPCC) report completed in February 2010 is, in the family’s opinion, “Heavily biased in favour of the police”, despite the obvious suspicious circumstances surrounding Sean’s death. A catalogue of errors in the investigation has caused the family to lose faith in the British judicial process following a death in custody.

For two years the family have vigorously enquired and campaigned in an attempt to find out the truth of what really happened on the night. Currently the family’s legal team are preparing for the inquest, scheduled for 2012.

Justice and Change will be hosting an open floor discussion where they and other families will talk about their experiences of injustice. The family campaigns include Christopher Alder, Brian Douglas, Roger Sylvester, Ian Tomlinson, Blair Peach and Jean Charles de Menezes amongst others, who have lost loved one’s in police custody - all have lost faith in the British Judicial System. What has really changed in the last 30 years?

Come listen and discuss your views about the controversial topic of deaths in custody and the lack of accountability.

Other supportive death in custody campaign organisations, such as INQUEST, Newham Monitoring Project (NMP), Black Mental Health UK (BMH UK) and United Campaign Against Police Violence (UCAPV), will speak about the current issues and explore what can be done do to bring about awareness and change.

Family solicitor Anna Mazzola said: “It is now two years since Sean died and his family are no closer to getting answers to fundamental questions such as: why didn’t the police and NHS Trust respond to pleas for help from Sean’s mental health hospital? What happened to Sean in those crucial minutes between him being arrested and arriving in a collapsed state at Brixton police station? Why haven’t they been able to access key CCTV footage from the night? It is devastating for the family that they should have to wait until 2012 for a full inquest and deeply worrying that until that time the policies and failings which led to Sean’s death will remain unremedied.”

Deborah Coles of Inquest said: “Sean’s family’s disquiet about the lack of impartiality and independence of the investigation process and the serious delay in holding an inquest have once again resulted in a lack of confidence in the investigation mechanisms following deaths involving the police. The recent decision not to prosecute anyone in relation to the death of Ian Tomlinson follows a litany of cases where the police have not been held to account for unlawful use of force and further anger and mistrust about how the state responds to such deaths.

“Sean Rigg was another black man who has died after being restrained by police officers. INQUEST’s monitoring of deaths in custody/following police contact has highlighted how a disproportionate number of people from black and minority ethnic communities have died following the use of force. INQUEST will continue to work with his family and raise the serious issues his death raises at a parliamentary and policy level. There must be non means tested public funding for the family to be represented at the inquest in the same way that police lawyers will be paid for out of the public purse and the inquest must be held as promptly as possible given the serious family and public interest in scrutinising the events leading to the tragic death of a vulnerable man.”

Patrick Ward of United Campaign Against Police Violence said: “The treatment of the family of Sean Rigg smacks of a justice system chasing its tail to cover up a scandal. Now the family are told to wait for the inquest in 2012, when no doubt the judicial system will seek other ways of proving its 'innocence'. We must unite at events like this to coordinate our continued campaign for justice for all those who have died at the hands of those who claim to protect us.”

The Campaign will also be hosting a private screening of the film “SUS” - a true and chilling account of one man's brush with the police in 1979 - written by Barrie Keefe who also wrote “The Long Good Friday”. Unfortunately due to limited seating, this will be by invitation only. However, SUS will be out on DVD 6 September. See the film’s website for upcoming screenings www.susthemovie.com.

Followed by a Public Meeting 6-8.30pm