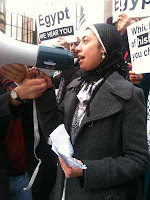 Up to 80 people, including around 20 Egyptians living in Tyneside, gathered in central Newcastle to celebrate the fall of Mubarak. Along with some boisterous Egyptian singing, a series of speeches conveyed the joy and hope felt at the popular revolution's victory in toppling the president.

The rally follows a similar solidarity rally last Saturday and a Stop the War public meeting on Egypt during the week. Rana Salem (pictured), a recent graduate of Alexandria University now living in Newcastle, has spoken at all three events. She said: "Yesterday was like a dream come true. We had a dictatorship for 30 years. Now we have our freedom - and we are capable of doing anything."

Roger Nettleship, convenor of Tyneside Stop the War, chaired the rally, which was also supported by the local Amnesty International group. He said: "A victory for the democratic aspirations of the Egyptian people is a victory for all of us."

I also spoke on behalf of Stop the War, and emphasised the achievements of the revolution not only in defiance of Mubarak but of those Western governments that have supported him. Peter Sagar, Amnesty's regional co-ordinator, told the rally: "Previously there have been breakthroughs such as the end of racist apartheid in South Africa. The events in Egypt are another example showing that people can make change happen. It is an answer to cynicism and defeatism."

Student activist Simon Childs said: "Through our occupation at Newcastle University I learnt the importance of solidarity from the wider world. We have a duty to offer solidarity to the Egyptian people." Hazera Begum, a young anti-war campaigner, said "This gives us hope that there can be opportunities for the youth, jobs for the unemployed and a better life for retired people."

Mahmoud Kurdi, from Newcastle's Muslim Welfare Centre, drew a great response when he spoke of the wave of popular mobilisations across the Arab world. "We celebrated Tunisia. Now we celebrate Egypt. Where will be next?"

Simon Hall, international officer of Gateshead Unison, "The workers play an important role in this revolution. As trade unionists we take inspiration from them." Lynne Hunter, of Tyneside Palestine Solidarity Campaign, stressed the significance for the wider region: "We can hardly exaggerate the importance of the revolution for the Palestinians. It changes power relations across the whole region."

Barry Gills is professor of global politics at Newcastle University, where he is president of the lecturers' UCU branch. He urged us to pressure our own goverments in the West to break from supporting those in the old regime trying to claw back control. He also remarked that "Tunisia and Egypt could be just the beginning of a wave of popular uprisings."