Via Stop the War circular:

'The 90,000 US secret documents leaked today confirm everything the anti-war movement has said for years. The biggest ever wartime leaks show conclusively that the war in Afghanistan is pointless and unwinnable and the warmongers have lied to us continually.

The war must end now. All foreign troops must be withdrawn without delay. 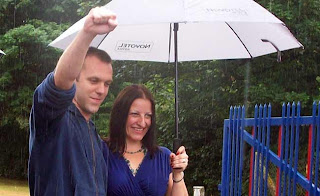 The Guardian, giving 14 pages of coverage to the revelations, reports, "The huge cache of secret US military files provides a devastating portrait of the failing war in Afghanistan, revealing how coalition forces have killed hundreds of civilians in unreported incidents, Taliban attacks have soared and Nato commanders fear neighbouring Pakistan and Iran are fuelling the insurgency."

In this context, David Cameron's timetable of at least five more years killing is tantamount to premeditated mass murder. British soldiers are being asked to kill and die in a war which is lost. They must come home now.

The rally tonight (26 July) in London, AFGHANISTAN: TIME TO GO, featuring among others, Joe Glenton (pictured with his wife, Clare), the soldier court martialled for refusing to fight in Afghanistan, MPs Caroline Lucas and Jeremy Corbyn, and columnist and comedian Mark Steel, could not have been more timely. If you live in London, it has become a must go event.'

End the war in Afghanistan: national demonstration set for 20 November