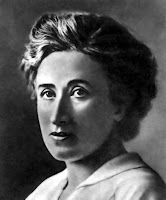 I've just re-read Tony Cliff's little book on Rosa Luxemburg (pictured) - it's contained in Cliff's 3-volume selected writings - and was particularly impressed by the force of a couple of passages from Luxemburg quoted in the section on the mass strike. Cliff's short book, first published in 1959, is online HERE.

Today, at a time that the working class must educate, organise and lead itself in the course of the revolutionary struggle, when the revolution itself is directed not only against the established State power but also against capitalist exploitation, mass strikes appear as the natural method to mobilise the broadest proletarian layers into action, to revolutionise and organise them. Simultaneously it is a method by means of which to undermine and overthrow the established State power as well as to curb capitalist exploitation ...

In order that the working class may participate en masse in any direct political action, it must first organise itself, which above all means that it must obliterate the boundaries between factories and workshops, mines and foundries, it must overcome the split between workshops which the daily yoke of capitalism condemns it to. Therefore the mass strike is the first natural spontaneous form of every great revolutionary proletarian action. 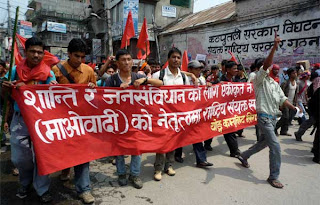 The more industry becomes the prevalent form of the economy, the more prominent the role of the working class, and the more developed the conflict between labour and capital, the more powerful and decisive become the mass strikes. The earlier main form of bourgeois revolutions, the battle on the barricades, the open encounter with the armed State power, is a peripheral aspect of the revolution today, only one moment in the whole process of the mass struggle of the proletariat....

The movement does not go only in one direction, from an economic to a political struggle, but also in the opposite direction. Every important political mass action, after reaching its peak, results in a series of economic mass strikes. And this rule applies not only to the individual mass strike, but to the revolution as a whole.

With the spread, clarification and intensification of the political struggle not only does the economic struggle not recede, but on the contrary it spreads and at the same time becomes more organised and intensified. There exists a reciprocal influence between the two struggles. Every fresh attack and victory of the political struggle has a powerful impact on the economic struggle, in that at the same time as it widens the scope for the workers to improve their conditions and strengthens their impulse to do so, it enhances their fighting spirit.

After every soaring wave of political action, there remains a fertile sediment from which sprout a thousand economic struggles. And the reverse also applies. The workers’ constant economic struggle against capital sustains them at every pause in the political battle.

The economic struggle constitutes, so to speak, the permanent reservoir of working class strength from which political struggles always imbibe new strength. The untiring economic fight of the proletariat leads every moment to sharp isolated conflicts here and there from which explode unforeseen political struggles on an immense scale.

Thus we find that the two elements, the economic and political, do not incline to separate themselves from one another during the period of the mass strikes in Russia, not to speak of negating one another, as pedantic schemes would suggest.'

Image: protestors in Nepal, where the issue of mass strikes has been of critical importance in recent months.
Share

Alex Snowdon is a Counterfire activist in Newcastle. He is active in the Palestine Solidarity Campaign, Stop the War Coalition and the National Education Union.​