A new Freedom Ride in opposition to Islamophobia was announced at last week's conference against anti-muslim hatred. Alex Snowdon looks at the original Freedom Rides which began as an initiative of the American Civil Rights movement

What better way to mark the 50th anniversary than announcing a new Freedom Ride, in opposition to Islamophobia, as happened at last weekend's European anti-racist conference in London?

The new initiative is a creative tribute to the legacy of the 1960s Freedom Rides against racial segregation, as well as responding to the urgent need to confront rising anti-muslim racism across Europe. It is especially a response to the French government's ban on women wearing the full veil in public.

The original Freedom Rides were prompted by segregation in transport and public facilities. In 1961 the old, racist 'Jim Crow laws' were still in place, institutionalising the separation of people on the basis of skin colour - and their unequal treatment, with black people typically having poorer facilities.

In 1955 Rosa Parks famously refused to sit in the designated area of a segregated bus in Montgomery, Alabama, triggering the successful Montgomery bus boycott campaign. In 1961 some activists decided to make a stand against continuing segregation on interstate travel, i.e. the long-distance buses crossing state boundaries.

The first freedom ride, which departed Washington DC on 4 May 1961, involved 7 black and 6 white people sitting together on two segregated buses. The buses travelled through several states, with New Orleans as the activists' planned destination on 17 May. One rider would sit where they were supposed to, so they didn't risk arrest - and could therefore contact organisers, the Congress of Racial Equality (CORE), to arrange bail.

On 14 May a Ku Klux Klan gang attacked the freedom riders in Alabama. The vicious mob violence was organised by local senior police officers. One of the buses was firebombed and the racist gang attacked people as they escaped the burning bus. 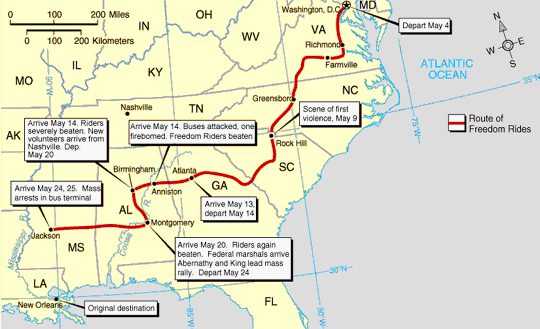 A mob later gathered outside the hospital where freedom riders had been taken. Most of the activists were refused treatment by the hospital, which threw them out at 2am to face the racist mob. A contingent of local black activists arrived to rescue the Freedom Riders from further racist violence (this would become a familiar pattern).

The other bus had, meanwhile, been attacked by 8 Ku Klux Klan thugs, who left activists semi-conscious. The bus continued, but was attacked for a second time that day. In Birmingham, Alabama, a KKK gang with police support assaulted activists with bicycle chains, iron pipes and baseball bats.

The original freedom riders - beaten savagely - were forced to abandon the bus journey. But, showing extraordinary resilience, they flew to New Orleans so they could still participate in the rally planned for the culmination of their direct action, which had drawn considerable attention and promoted the civil rights cause.

Activist groups were determined not to let violence stop them, so 10 students from Nashville bravely stepped in to continue the freedom ride from 17 May. They were arrested by the corrupt, racist cops in Birmingham.

More activists immediately responded to the call for volunteers to maintain the momentum of the Freedom Rides. There were more attacks in the following days, but the activists were gaining impressive support in the areas they travelled through. Martin Luther King addressed 1500 supporters on 21 May. 3000 racists gathered outside.

Despite KKK violence, racist protests and arrests by local police, injured or arrested freedom riders would be replaced by new volunteers. The numbers grew and grew. National authorities were put under great pressure to intervene against local racist police forces and gangs. Black people rallied around in support, and white sympathisers took heart from the freedom riders' courage and perseverance.

The Democratic administration in Washington tried to maintain a 'neutral' stance, saying it couldn't 'take sides' and criticising Freedom Riders for being 'unpatriotic'. A number of prominent civil rights organisations responded with fury. But they also translated this into action, launching a Freedom Riders Coordinating Committee determined to sustain Freedom Rides throughout the whole summer of 1961.

Despite hundreds of arrests, around 450 people participated directly in at least one Freedom Ride, which had begun in May with just 13 people who planned to travel for 13 days. At least 60 Freedom Rides took place during those months. The numbers were divided roughly equally between black and white, a powerful statement of unity and active co-operation.

The movement extended into new areas, with mainly young black and white people defiantly sitting together in segregated restaurants and other public places. A new generation, inspired by the Freedom Rides, was refusing to submit to the old divisions, defying the repeated attacks and arrests by police forces which were increasingly forced on the defensive.

On 1 November, new legislation came into place. It had been wrenched out of a reluctant Attorney General, Robert Kennedy, by the civil rights movement. Travellers on interstate buses could now sit wherever they wanted. Segregation was also outlayed in the bus terminals' facilities and in a number of other places.

This was a major turning point in the long struggle to end segregation. It was a victory for determined collective action and the growing movement of multi-racial solidarity with the Freedom Riders. In the face of a hostile press, viciously repressive policing, racist gangs and a miserably weak federal government, the movement made a historic advance in the course of 6 months during 1961.

The Freedom Rides inspired further actions in the following years, which saw the civil rights movement grow and extend into new areas. It is an episode in our shared history of anti-racist struggle which can inspire us today, as we confront the state-sanctioned racism of Islamophobia.