From the Jarrow Crusade to the Arab Revolutions and 26 March - Mark Tyers reviews this timely exhibition of resistance. 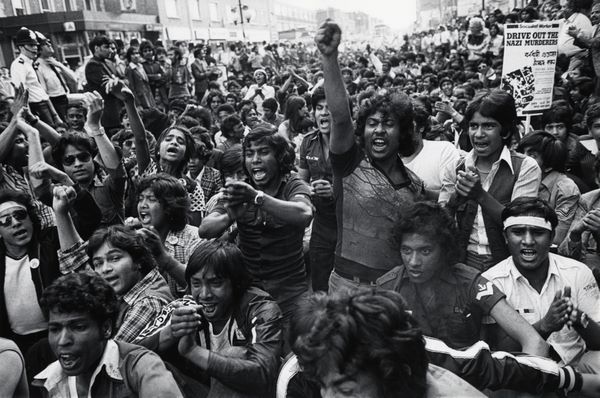 A Luta Continua! (The Struggle Continues!)

Newcastle's Side Gallery has recently had its Arts Council funding axed, so what better time to host an exhibition of classic and contemporary photographs, documenting acts of resistance from the streets of Newcastle, London and around the world?

A miners' support group banner leads a mass of people across the Wearmouth bridge - Anti-racists block the route of the National Front in Lewisham 1977 - A temporary standoff in Trafalgar Square between the poll tax rioters and a line of police separated by a no-mans-land of tarmac littered with placards.

A timeline of resistance, starting with black and white stills, eventually winds its way into a contemporary display of digital images. The focus is largely on street demonstrations, displaying a huge array of demonstrations covering issues from racism and poverty to unfair taxes and public sector cutbacks. The diversity of issus highlighted is a strength of this inspiring photographic exhbition.

'Resistance happens - and will be celebrated', seems to be the main message.

In the later section entitled 'get involved', the student revolts of late 2010 are pictured among other protests which have happened in the last decade. These include a series of images from an anti-war protest in New Mexico in 2003, a backlit 'Globalise Resistance' banner being marched down a London street, and a section of stunning images from the Egpytian and Tunisian revolutions.

It is in this section that the exhibition makes its only jarring note. Amidst a sea of protesting students, anti-war campaigners and other progressives, an aggressive nationalistic flottilla of EDL images sprawls into view. Waving an Osama Bin Laden figure around, draping St George's flags on a portacabin, flashing to the camera - they've been taken by a photographer who has clearly gained the racists' trust.

The lack of any accomapanying critical commentary, combined with a sparse number of images documenting the anti-racist counter demonstrations, could suggest that regressive racist protests against Muslims are no diferent from demonstrations against nuclear wepaons.

The exhibition concludes, however, with 26 March 2011: a woman, post-demo, leaning against a wall reading a Coalition of Resistance broadsheet.

There's something for everyone who has ever been on, or been inspired by, a demonstration. As an added bonus, local protestors will also enjoy trying to spot people they know in some of the images - I know I did!