The Independent today reports secret talks between trade union movement leaders and representatives of the government. These are apparently paving the way for a meeting between David Cameron and TUC general secretary Brendan Barber before the end of the year. 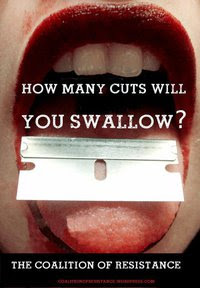 Barber and the TUC have previously displayed their misguided desire for 'partnership' with the coalition, first by inviting Cameron to address September's TUC annual conference and then - after Cameron declined - inviting Lib Dem Cabinet minister Vince Cable instead (grassroots pressure led to the invitation being withdrawn).

We've also seen the TUC fail to provide any co-ordination of opposition to public sector cuts, notably by refusing to call a national demonstration around Chancellor George Osborne's comprehensive spending review in October.

The TUC can be especially weak because it's not subject to rank and file pressures to the same extent as the general secretaries and national executives of the unions themselves (though it can't ignore the grassroots of the union movement completely, and of course leaders of individual unions are eminently capable of making compromises). Even moderate union general secretaries, such as Dave Prentis in Unison or Derek Simpson and Tony Woodley in Unite, are obliged to deliver good militant rhetoric and at least consider industrial action.

From the government's point of view it is wise to do business with the upper echelons of the union bureaucracy. The right-wing press may be rabid in its attacks on even the more moderate union elements - see the hysteria directed towards the Unite leadership over the BA cabin crew strike - but Tory ministers know it is sensible to talk to them. They are perfectly aware of the seriousness of the threat posed by the unions, especially if co-ordinated mass action is on the agenda.

The Independent quotes a Conservative source: "We are never going to be flavour of the month with them, given their Labour links, but we want to get back to where we were before Thatcher. Although obviously we differ, there is a recognition that it is better for everyone if we spoke."

The phrase 'given their Labour links' is a clever one, casting any oppositional rhetoric from trade unions as a symptom of old loyalties to Labour, rather than a reflection of the fact that ConDem cuts will savage pay, pensions, jobs and services. But the more signifcant point of interest is the obvious desire to neuter a layer of the union bureaucracy, and therefore decisively undermine the union movement's capacity for resistance.

According to the Independent, only one meeting ever took place between Margaret Thatcher and TUC leaders. That didn't stop the TUC playing a major role in dampening down struggle in the 1980s, but such a role was influenced more by its allegiance to a rightward-moving Labour Party - and the union bureaucracy's mediating position in relation to employers and workers - than any direct negotiating with the Tory government.

The Tories aren't stupid. Their 'trade union envoy' is Richard Balfe, a former Labour MEP who defected to the Tories in 2002, rather than an old-school Tory. They will no doubt deploy Lib Dems like Vince Cable to negotiate, as they will probably be seen by the likes of Barber as more amenable.

Not that Barber needs much persauding of the value of 'partnership'. He has, after all, invited Mervyn King, governor of the Bank of England, to address the TUC conference. This reflects a deep-seated attachment to the notion of trade unions as gentle lobbying groups which should avoid confrontation at all costs.

Historically, the TUC has been influential in selling trade unionists short when they have taken action, effectively protecting governments from militant action. The most famous and important example was the General Strike of 1926, when the TUC General Council allowed the entire union movement to suffer a devastating defeat.

Earlier, in the exceptionally militant 1919-21 period, the TUC had also played a highly compromising role. Michael Woodhouse, in his superb 'Marxism and Stalinism in Britain 1920-26' (an account of the early years of the British Communist Party and the political context which shaped it), noted that both the TUC General Council and the 'Triple Alliance' (mining, rail and transport unions) leaders sold out the militant struggles of those years.

But Woodhouse also commented on the astuteness of political leaders in the Tory-Liberal coalition government:

'[The TUC's] work of assisting the Coalition government to overcome the dangers of the post-war period was greatly assisted by the high political consciousness of Lloyd George and his acute perception of the character of the Labour [trade union] leaders, of how to manoeuvre with them and when to make judicious concessions to assist them in their task of controlling the rank and file.'

A number of things are necessary if we are to counteract the dismal vacillating of the TUC. Firstly, we need to be clear about what the government is doing and why it is wrong. Inviting Mervyn King and Tory politicans to union events reflects, amongst other things, ideological disorientation on the part of TUC leaders. They accept the need for 'some cuts', and fail to understand the class-based character of austerity - it is a systematic effort by a party of the rich to make working class people pay for a crisis they didn't create, while allowing bankers and the super-rich off the hook.

Secondly, we need a mass movement that gives confidence to trade unionists to resist through strike action. The strength of community campaigns and an increasingly well co-ordinated national protest movement can serve as encouragement to industrial action.

Finally, grassroots trade unionists need to pile on the pressure to force serious action from their leaders. The lobby of the TUC conference, called by the National Shop Stewards Network, is one way of doing this. Raising support throughout the union movement for strong calls for action, like the RMT's motion at the TUC, is also important.

Beating the cuts will require mass collective action, through demonstrations and strikes, not polite discussions in Downing Street.

Image: a proposed campaign design, volunteered to the Facebook group for Coalition of Resistance.