Costing nearly $2 Billion and causing the defacto annexation of 46% of the West Bank, Israel defiantly continues to build the illegal ‘separation wall’ across the West Bank.

Once a week for over five years Palestinian, Israeli and international activists have gathered and lead a protest march to the razor wire fences that trace out the unbuiltparts of the future wall. Israel holds itself up as a beacon of democracy in a sea of oppressive regimes. Travelling to Bil’in, that beacon appears more of a flicker.

The local Palestinian organisers address the sea of flags in Arabic and then English about the continued need for non-violent resistance. The march moves off down towards the wall and fervent chanting by the core is closely followed by apprehension: 3 Palestinians have been killed here in the past few months by the IDF. An American still lies brain dead in a Tel-Aviv hospital after he was intentionally shot in the head with a tear gas canister. In European cities the police use plastic canisters to avoid injury, here the Israelis prefer Metal, and after being fired from a gun, they have the velocity and power of bullets.

A local activist and a popular hero was a victim in April, Israeli soldiers shot Bassem Rahma in the heart. Video footage of his death clearly shows he was unarmed, and separated by two barbed wire fences from the soldiers; there was no justification for his killing. This was cold-blooded murder; at the time he was trying to tell them to stop shooting as an Israeli activist had been hurt. As we proceed towards the fence a grenade explodes in the air. “Do not be afraid, we will not be oppressed, we are non-violent and within out rights, FORWARDS FRIENDS!” One of the organisers yells over a megaphone. As we move to within 150 meters of the fence the soldiers begin to fire Tear gas behind us. Soldiers on our flanks and gas pouring out into the air are quickly boxing us in. The flags remain high and the demonstration remains peaceful, we continue to nervously move forward. 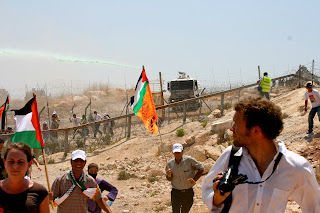 As we move into range the Israelis bring out a water cannon hidden behind a hill. It immediately begins to fire on us, the white armoured van spraying out jets of Aquamarine blue. I assumed the putrid smell, akin to rotting meat, is a chemical added to the water along with the dye. Wondering what the brown stains on my jeans are, it later transpires that we are being doused with raw sewage.

The first barrage of tear gas falls around us, we scatter and take cover, the canisters are being fired straight at us and they will kill you if the hit you. The first waft of acrid chemicals hits my nostrils and within seconds my skins feels like it is on fire. We hurriedly pour lemon juice into our eyes and onto our faces but the gas has hit our respiratory system. Your body is convinced you are choking and I gasp for air in the 35 ∞ heat. People start to turn and run, panic rips through the crowd, flags are trodden underfoot as people sprint back over the hill. Not wanting to be isolated, half blind and disorientated I too turn and run. Sharp cracks echo rounds the hills. The Israelis will fire rubber bullets and then live ammunition at the protest. Unwilling and unable to see what it is, I run for my life, Zig-Zagging down the road to make myself harder to aim at. A Cacophony of explosions; around 30 in quick succession comes from a Humvee as the Israelis fire a hail of Gas canisters onto us. Covering my head with my bag in the hope that it’ll deflect the volley people begin to scream and fall down. After what seems like an age, I make it out of range, but alone, at the fence, a single man remains in a fog of gas, holding his flag and facing the soldiers. I use my camera lens to see what’s going on; the soldiers are laughing at us. The Palestinians cannot even protest against the theft of their land. With 8,000,000 Palestinians crammed into less than 12% of historic Palestine, the need for an international movement is greater than ever. This was not a demonstration, it was another public humiliation.

From Beachs in Palestine