Spanish people have taken to the streets in huge numbers with public squares occupied by protestors opposed to austerity and calling for real democracy. Alex Snowdon argues that this is the new shape of working class resistance 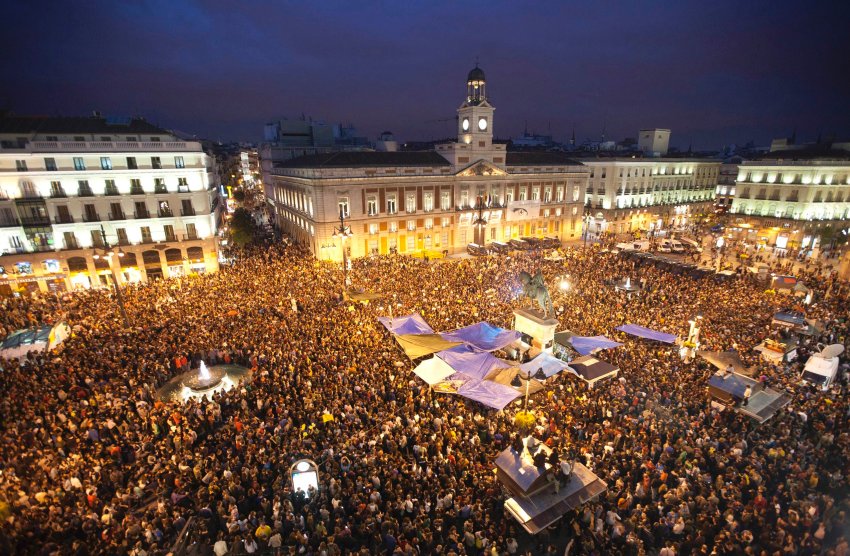 I've been looking at the extraordinary scenes in Madrid, via the live SolTV link. The mass movement seems to have swelled since its emergence on Sunday, in the capital and across Spain. It is both militant and massive.

One of the most useful things I've read about the background and development of the protests is this piece by Gemma Galdon Clavell.

The article explains that these protests are 'the immediate continuation of the May Day demonstrations that were organized independently of mainstream trade unions and parties and largely ignored by the media'.

It offers some longer-term background too, especially the movement opposed to the 'Sinde law' (which clamps down on illegal file-sharing), while pointing to the role of a Facebook group ('real Democracy Now') in catalysing the 'May 15 movement'.

The larger context is 'skyrocketing unemployment rates (45% registered youth unemployment), generalized cuts in health, education and wages, tax cuts for the rich and widespread political corruption'. None of this is being discussed or contested in mainstream political debate. There is a profound disconnection between the elite and the street. The article explains: 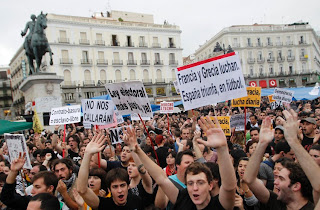 'Trapped in the tougher-than-you-on-crime race to the bottom, the gap between a population that hardly makes ends meet and sees banks and corporations get away with murder, and a political class that has built a wall of arrogance, incompetence, impunity and empty promises to keep the young, the unemployed and the evicted out has grown to reach seemingly unbridgeable proportions.'

The social democratic, or centre-left, Spanish government has presided over the unemployment, cuts and corruption. The entire political class is therefore the target of people's rage. It is therefore unsurprising that 'anti-politics' sentiment is widespread on the demonstrations, with contempt for all political parties. One useful account from Spain includes this observation:

'It is possible (in fact it is quite probable) that on 22nd May, when local and regional elections take place in Spain, the left will suffer a catastrophic defeat. If that were the case, it would be only be a preamble to what would happen in the general elections. What can be said today without hesitation is that the institutional left (parties and major unions) is the target of a generalised political disaffection due to its sheer inability come up with novel solutions to this crisis.'

However, this may not mean an automatic rejection of all things political. Gemma Galdon Clavell notes:

'as the #nolesvotes initiative shows, demonstrators have not given up on institutional politics -while the slogan in 2001 in Argentina was ‘que se vayan todos’ (get rid of them all), the #15m movement is giving non-mainstream parties a chance, and while claiming independence and autonomy, seems to be interested in building bridges with some parties.' 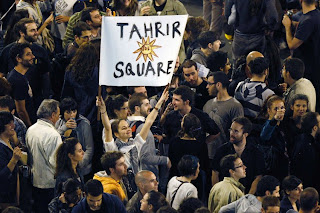 There is clearly a huge spontaneous element to the current upheavals, but there's also some background in the anti-Sinde law, May Day etc protests. Similarly, there's visceral anger with politicans but that doesn't mean absolutely no co-operation with any kind of political organisation. What happens next is highly unpredictable.

Social media have played their part - as we'd expect - and will continue to. But a radical idea only goes viral, and translates into mass protests and occupations, if it connects with large numbers of people's grievances. In the absence of any lead from established organisations - reformist parties, unions - a Facebook page and a Twitter hashtag can become detonators.

This popular working class revolt doesn't look how many would expect it to. The unions appear to be nowhere. At best they are lagging behind the mainly young people taking to the streets; at worst they are neutered by compromise with a failing centre-left government. It will be tempting for many protestors, and their supporters elsewhere, to conclude that spontaneity is all, organisation is irrelevant, and the unions should be ignored.

But that would be dangerous. The protestors will need to rapidly construct new, grassrooots, democratic forms of co-ordination and decision-making. They will have to demand the unions, which can still potentially mobilise millions, to get behind them.

The mass protests in Spain are an inspiration to everyone facing austerity and fed up with the hollowing out of democracy. The movement fuses economics and politics, just like in Egypt, Tunisia and elsewhere. It takes inspiration from the Arab Spring, while seeing itself as part of Europe-wide resistance to cuts. Spain's young workers, jobless and students are showing us the way.