John Rees looks at the dangers facing the Egyptian revolution

In the original 18 days of the Egyptian revolution in 2011 the crowd in Tahrir used to chant ‘the army and the people are one hand’. Its meaning might be said to range from ‘the army is with the people’ to an appeal to the army not to intervene against the revolution.

In the event the army was forced by the scale of the revolution and to pre-empt further division in its own ranks to act as the formal mechanism that removed Mubarak.

The Supreme Council of the Armed Forces (SCAF) had to be forced by revolutionary action to concede elections at all. For the last year SCAF has tolerated the Muslim Brotherhood Presidency of Mohammed Morsi precisely because it was no threat to the ‘deep state’, the inner core of the Egyptian ruling class to which SCAF is central both economically and politically.are

Under Mubarak the Muslim Brotherhood (MB) was part of the democratic opposition. Its members, including Morsi, were jailed and repressed by the regime. They were late in mobilising for the revolution, but they, especially the MB youth, did so in the end.

In power it has been the unabashed neoliberal economic policy of the MB that has disappointed revolutionaries, workers and the poor, and some sections of their own base. This has fuelled the continuing level of industrial unrest which is a permanent and under-reported backbone of resistance.

In addition the MB’s narrow electoral victory (Morsi only got 51 percent of the vote, with radical Nasserite Hamdeen Sabahy winning outright majorities in Cairo and Alexandria) was hardly a convincing mandate.

To this catalogue of ‘how not to run a revolutionary government’ we might add dissolving the parliament and a studied reluctance to call new elections, continued civil rights abuses, sickening praise for the police and an embarrassing and dangerous placatory attitude to SCAF.

In this context the size of the June 30th protests are easily explained.

The June 30th mass demonstrations, which were proportionally as big in many towns and cities outside Cairo as they were in the capital, open a new phase of the revolution.

'Christians and Muslims are one hand'

The crowds were by all accounts less middle class and more working class and poor than before. The report in Foreign Policy confirms what many participants were reporting on twitter:

‘The daytime crowd in Tahrir crossed religious and socioeconomic lines -- old women in black hijabs shouted irhal, or 'leave,' next to youths carrying crosses, who chanted 'Christians and Muslims are one hand.' Protesters carried red cards -- both a reference to a soccer penalty and a message to Morsy that they wanted to force him from the political playing field. 'This is not a warning, this is a red card, you donkey,' read one poster (it rhymes in Arabic).The reputation of the Egyptian military has also undergone a significant revival among anti-Muslim Brotherhood forces. Cheers erupted from the crowd when army helicopters flew over the square; one protester turned to me to explain, 'They're here to protect us.' Meanwhile, the U.S. government has become the bête noire of protesters, who blame Washington for propping up the Morsy administration. Tattered pictures of U.S. Ambassador to Egypt Anne Patterson, with a giant red 'X' through her face, littered the ground of the square. Meanwhile, a large poster declaring 'Obama Supports Terrorism' had pride of place at the center of the demonstration.’

But this is not simply a more working class re-run of the 18 days. There is a three-cornered fight for power taking place. The actors are the MB government, the army representing the core of the ruling class, and the street revolution.

The army is the crux of the matter. The MB demonstrators were chanting ‘the army and the people are one hand’: that is they were appealing to the army to intervene and save the government. In Tahrir many cheered the army helicopters as they repeatedly passed overhead trailing the Egyptian flag: that is they hope the army will assist them in removing Morsi.

This is a dangerous strategy. The army’s ultimatum to the political forces to sort out the ‘chaos’ or it will intervene within the next two days may result in a coup, although this is not the SCAF’s aim at the moment. For now SCAF wants to engineer a return of the remnants of the old Mubarak political class without Mubarak. And there are elements of that class~former Mubarak appointees Amr Moussa and El Baradei~who have stood with the opposition and would be only too happy to play that role.

The mistake of some radical elements of the opposition, including Hamdeen Sabahy, was to ally with these elements in the National Salvation Front on the mistaken belief that everyone in the opposition must stand together against the MB government.

This was a mistake because these different elements were in conflict with Morsi for diametrically opposed reasons. The radicals want a deeper, more through-going revolution that at least accomplished the demands of the 18 days. Amr Moussa wants to return to as near the old order as possible, as soon as possible. No wonder the army thinks it sees a chance of getting even more of its own way than it was getting with Morsi.

But Amr Moussa does not represent the revolution. Neither do the army. The trouble is that the revolution desperately needs to develop a political representation that is an adequate expression of the interests of those doing the fighting in the streets. 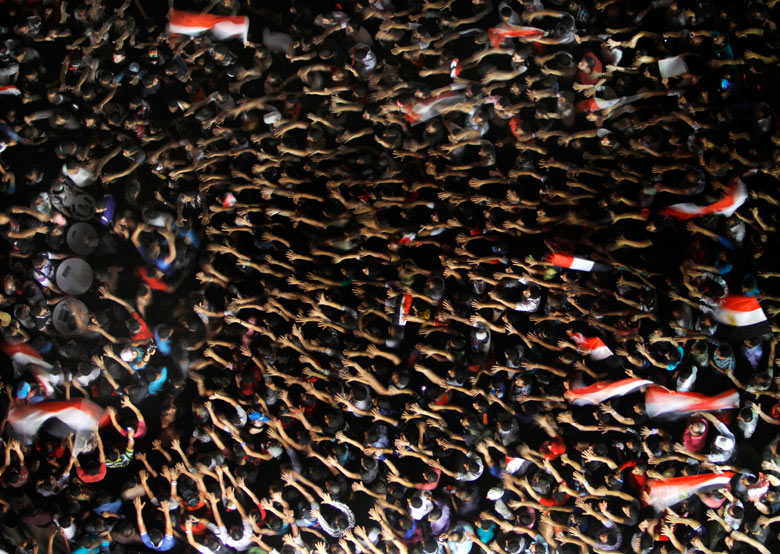 In a revolution power falls in to the street, but unless the revolution has an adequate organisation that can pick it up it may fall into the hands of political figures and social forces whose aims fall far short of, or directly contradict, those of the mass of the people who made the revolution.

There is now a gaping hole in the heart of the Egyptian revolution: its lack of any institutional embodiment of revolutionary power. It is almost unique for a revolution of such depth, and which has now lasted over two years, not to develop such intuitions.

Economic struggle, even a general strike, can assist in producing such intuitions but they are not in themselves a replacement for them. Economic struggle alone can end up simply flowing into channels created by hostile political forces, just as the demonstrations may lead to political forces whose aims run contrary to the revolution seizing power on their back.

There is, in effect, dual power in Egypt. On the one hand the various elements of the political class that either are the government (the MB) or would like to be the government (sections of the NSF). On the other hand the power of the mass demonstrations that repeatedly intervene to ‘correct’ the course of the revolution.

But street demonstration and strikes are a blunt political instrument. There needs to be a politically representative institution that can compete with the old political class and its junior would-be partners on equal terms and, ultimately, replace them. Without that SCAF will choose the government it least dislikes, and if that does not work, move toward a coup.

The army and the people are not one hand. Rather SCAF are playing a counter-revolutionary hand. And they may become a fist waiting to smash the revolution.

John Rees is a writer, broadcaster and activist, and is one of the organisers of the People’s Assembly. His books include ‘The Algebra of Revolution’, ‘Imperialism and Resistance’, ‘Timelines, A Political History of the Modern World’, ‘The People Demand, A Short History of the Arab Revolutions’ (with Joseph Daher), ‘A People’s History of London’ (with Lindsey German) and The Leveller Revolution. He is co-founder of the Stop the War Coalition.